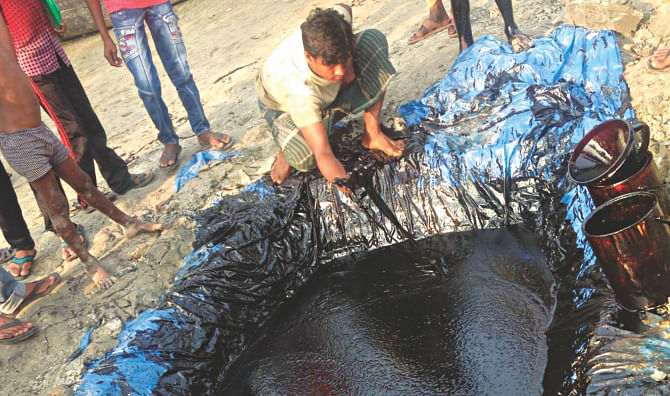 Children scoop up the furnace oil from the Shela river and deposit it in a trench so that it could be sold later on. To help with the clean-up after the oil spill on Tuesday near the Sundarbans, the BIWTA had announced that locals could collect and sell the oil. The photo was taken at Badamtola near where the oil tanker had sunk. Photo: Courtesy

The air around the Sundarbans is thick and it smells foul. The black slick flowing down the Shela and Pashur rivers, covering grasses and plants on their banks, gives a feeling that it is not the world's biggest mangrove forest, rather an industrial city cursed by civilisation's waste.

Animals have started to die. The water hyacinths on the two rivers have turned black. Some Golpata trees have gone under heavy layers of oil.

One local, Abu Jafar, spotted two animals -- a monitor lizard and an otter -- dead and smeared with oil along the banks of the Shela.

Meanwhile, the authorities pulled the sunken oil tanker ashore around 11:00am yesterday, some 30 hours after the accident. But all the 3.58 lakh litres of furnace oil the tanker had been carrying already spilled into the rivers and the adjacent cannels.

Two of the six containers of oil in the vessel were completely damaged, Giasuddin said. “We are checking to see if the four other containers are all right.”

As of last evening, the slick spread over a stretch of more than 60km -- up to Koromjal in the upstream and up to Kachikhali in the downstream. At least 20 canals connected to the Shela river were polluted.

The impact of the pollution is yet to be determined and officials are working to that end.

The slick started on Tuesday morning, after the oil tanker, Southern Star-7, carrying 3.58 lakh litres of furnace oil and eight crew members sank near Mongla around 5:00am.  It went down after being hit by a cargo vessel from behind. Seven crews managed to swim ashore, but its captain Mokhlesur Rahman is still missing.

Meantime, the authorities have asked the local people to collect the furnace oil and sell it to the Padma Oil Company agents. Locals have been advised to use fishing nets, sponges or any other manual means to collect the oil.

“We have been asking the local people to collect the oil and sell it to the agents of Padma Oil. They would be able to collect it by using sponges or nets,” BIWTA Chairman Shamsuzzoha told The Daily Star yesterday, when asked about the cleaning plan.

A number of TV channels also quoted him as saying that Navy vessel Kandari-10 would spray a powder adhesive to increase the density of the oil. It will then be swept away through fishing nets from at least 20 points.

However, one forest official said they did not allow the BIWTA to spray the powder adhesive, as that could harm the biodiversity of the Sundarbans further.

The Mongla Port authority may start applying the powder today if they get clearance from the environment department.

To stop the spread, the authorities have banned plying of vessels through the Shela river until further notice. 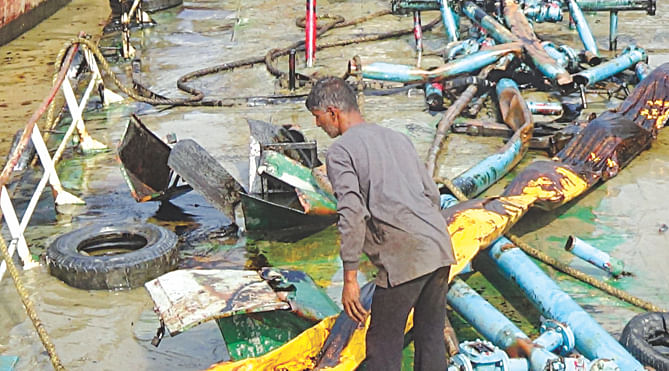 A man inspecting the wreck of the oil tanker after it was pulled out of the Shela river yesterday. The tanker went down in the river loaded with furnace oil early Tuesday causing damage to the environment of the Sundarbans, the largest of its kind in the world. Photo: Star

“The forest department and the district administration will enforce this decision,” Shamsuzzoha said.

Plying of vessels through the reserve forest, a Unesco natural heritage site, is illegal at any time under the environment protection law.

When pointed this out and asked why the authorities did not ban playing of ships earlier, Shamsuzzoha said they had to allow it since the alternative route, the Mongla-Ghorisakhali channel, lost navigability.

“But now we have been forced to make this decision because of the accident,” he said, adding that now all the commercial vessels would go through the Pashur river via Akram point.

But though the decision was made at a meeting yesterday morning, this correspondent saw around 3:00pm three vessels plying through the route where the accident happened. The three ships are MV Jal Bihanga, MS Shurovi Carriers and MV Beauty Keraniganj.

The oil slick will have a severe impact on the aquatic lives and the mangrove plants grown along the shorelines where the thick layer of oil has gathered. Fish and other aquatic lives would start dying in large numbers in a day or two, while the mangroves might start dying after a month. The spill will also cause a huge problem on the shorelines of canals and rivers the animals of the mangrove forest drink from, wildlife experts told this paper on Wednesday.

“Not only the aquatic resources, all the animals of the Sundarbans will be affected by this accident as all the animals come to the rivers and canals to  drink  water,” said Monirul H Khan, an eminent tiger expert.

But the most horrific thing is that the oil would be in the ecosystem for up to 50 years, he added.