In the last 18 years we have experienced some of the most significant moments in the history of Bangladesh. On the occasion of the Star's 18th anniversary, we get the opportunity to have a look at those momentous days.

1.  The First Triumph, ICC Champions Trophy 1996/97 (April 13, 1997)
The whole country burst with joy when Hasibul and Khaled Mashud, two Bangladeshi batsmen, secured the winning run in the last ball in a tough match with Kenya. This victory made Bangladesh the winning team of the 1996/97 ICC Champions Trophy and qualified the team to participate in the ICC World Cup of 1999. Winning the match against Kenya was the stepping stone for Bangladesh's entrance to the world of international cricket. 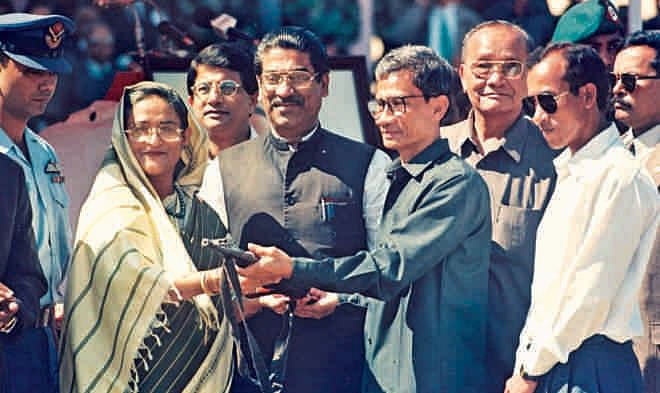 Santu Larma surrenderd weapons to the then Prime Miniser after signing the peace accord. Photo: Star File

2.     Peace in the Hills (December 2, 1997)
Just after the liberation of Bangladesh, another struggle for self identity began inside the war torn country. Organised militia named Shanti Bahini, formed by the indigenous races residing in the Chittagong Hill Tracts, started an insurgency against the Bangladesh government. Their first attack on the Bangladesh army convoy took place in 1977. Ever since then, every government of the country had tried to repel the insurgency, sometimes by military operations and sometimes by pushing in Bengali settlers in the hill tracts. Finally in 1997, the Bangladesh government signed a peace accord with Parbatya Chattagram Jana Shanghati Somiti, the political organisation that controlled Shanti Bahini, and ended the decades-long insurgency. The peace accord that for the first time recognised the rights of the ethnic communities of Chittagong Hill Tracts, is still in effect. 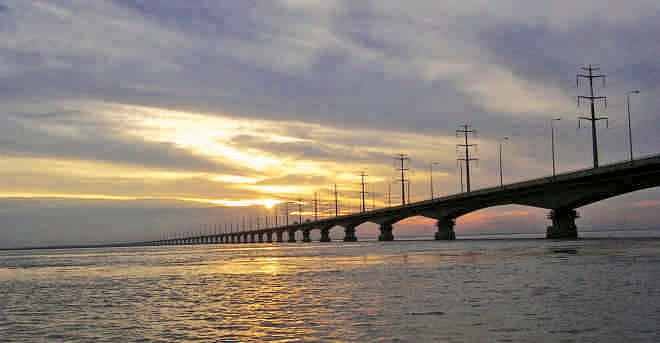 3.  Bridge over the River Jamuna (June 23, 1998)
After four decades of planning and a decade of hard work, the Jamuna Bridge was finally opened to the public, linking the country's eastern and western parts. Besides offering quick movement of goods and passengers by road and rail, this bridge is essential for the transmission of gas, electricity and integration of telecommunication. Once the 11th longest bridge in the world, it has now been weakened terribly due to flawed design and poor maintenance. Temporary repairing has been going on for years but like many other key resources of the country, the fate of this lifeline is hanging on thread. 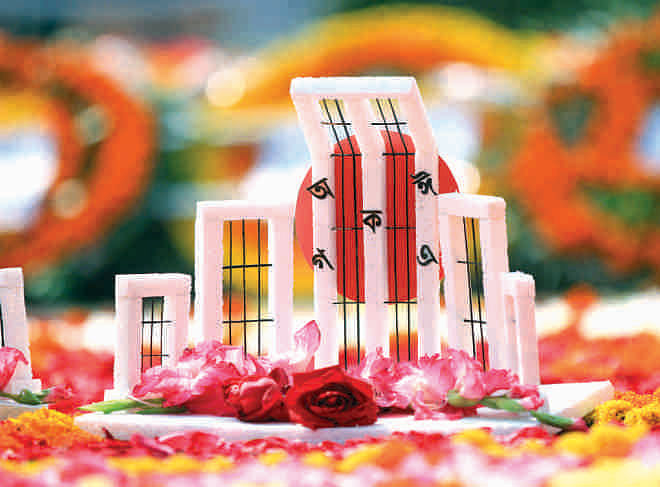 4.  Recognising the Sacrifice (November 17, 1999)
The triumph of eternal love for the mother tongue that took place in Bangladesh in 1952 was recognised by the world in 1999. On this day UNESCO announced February 21 as the International Mother Language Day. The day has been observed by Bangladeshis as the Martyr's Day when several Bengali students were killed by the Pakistani army during a procession demanding the rightful status of Bangla as one of the state languages of Pakistan. 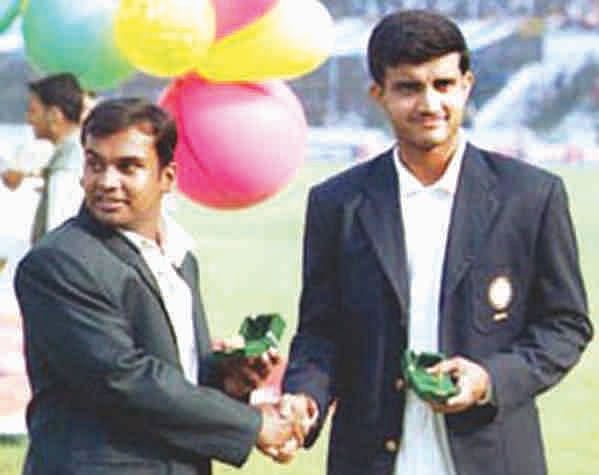 5.  Winning the Status (June 26, 2000)
On this day, the Bangladesh Cricket Team attained the status of a test playing country. The day marks Bangladesh's formal entrance to the cricket world. The inaugural test match took place in Dhaka against the visiting Indian team from November 10 to 14, 2000. Though, the Tigers lost the match, the fighting spirit of our players showed that the team would become a formidable competitor for cricket champions. 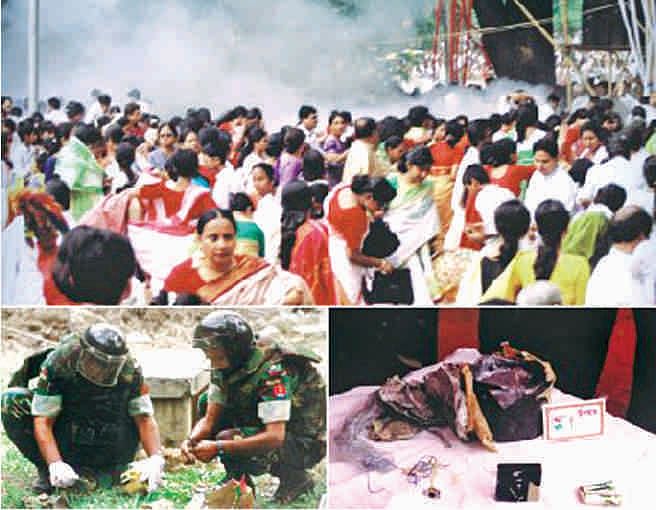 6.  The Rise of Militancy (April 14, 2001)
For the first time, Bangladeshis experienced the terror of militant activities in their homeland. Suicide bombing at a cultural programme of Pahela Baishakh (Bengali New Year) in Ramna Batamul shocked the country as people all over the country saw the explosions live through Bangladesh Television. Ten people including the attacker died on the spot. Another such attack took place during a cultural programme of Udichi. It was the first suicide bombing in Bangladesh, signalling the rise of militancy in a country traditionally known for its religious harmony. 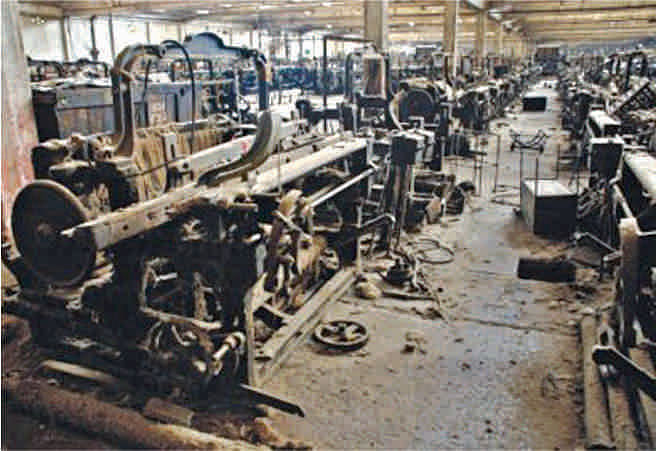 7.  The Lost Glory of the Golden Fibre (June 25, 2002)
Bangladesh was the biggest producer and exporter of jute fibres and products and also boasted of having the largest jute mill in the world, Adamjee Jute Mills. Due to mismanagement and negligence, this huge factory began to incur losses amounting to TK 1,200 crore. In the 2000-2001 fiscal year, the amount was Tk 190 crores. Showing these huge losses as a valid reason, the then government closed this huge industry amid severe protests from the local policy makers and political opponents. 18,519 skilled workers became unemployed and a large amount of valuable resources of this gigantic establishment were left unused. Due to this reckless step Bangladesh lost a key source of its foreign currency. 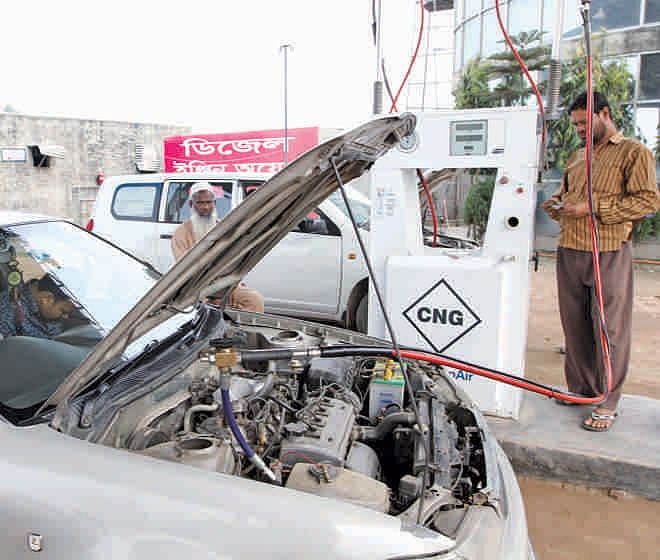 8.  For a Breath of Fresh Air (January 1, 2003)
To control excessive air pollution in Dhaka, the government had been thinking of converting all petrol or diesel run vehicles into CNG (Compressed Natural Gas) run vehicles in major metropolitan areas. From January 1, 2003, the then government banned all vehicles in Dhaka other then CNG run ones, and this is still in effect. CNG run vehicles produce the lowest carbon emission than any other motor fuel and the resource is also available in Bangladesh. Due to low price of this fuel, a large number of people managed to buy private vehicles and Dhaka's vehicle concentration increased many times than before. This step significantly reduced air pollution though it put some adverse pressure on the country's gas supply. 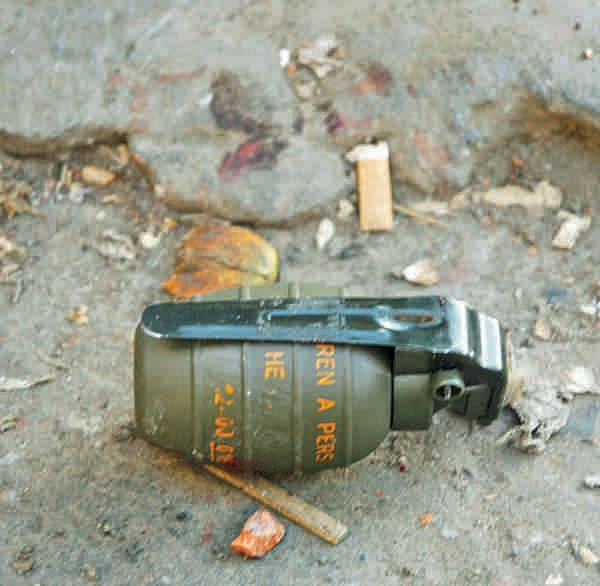 An unexploded grenade from the scene of the 21st August blast. Photo: shawkat jamil

9.  Bangladesh in Shockwaves (August 21, 2004; August 17, 2005)
Three years after the deadly explosion at Ramna Batamul, the people of Bangladesh faced another grenade attack from the same quarter, this time on the then opposition leader Sheikh Hasina and her party workers. Many workers, Hasina's bodyguard and some key leaders of Awami League such as Ivy Rahman died in the blast. Just a year later another militant group called JMB detonated 500 bombs at 300 locations in Bangladesh. Such synchronised bombing by a banned organisation was the first of its kind in the country. Though some lynchpins behind these attacks have been punished, these incidents left Bangladesh in the shockwave of militancy, the threat of which is still a burning issue. 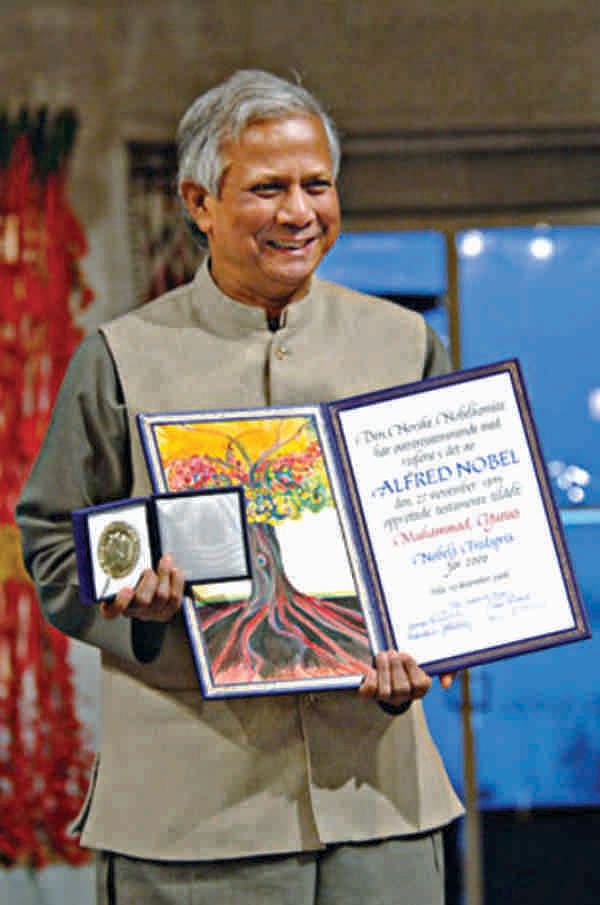 10.  The Wreath of Peace (December 10, 2006)
The entire nation rejoiced on this day with pride and glory and congratulated the first Bangladeshi to receive the world's most highly regarded award. Dr Yunus and his brain child Grameen Bank jointly received the 2006 Nobel Peace Prize for their contribution to poverty alleviation through the micro-credit system. Dr Yunus is one of the seven people in the world to have won the Nobel Peace Prize, the Presidential Medal of Freedom and the Congressional Gold Medal. After this grand recognition, various countries opened their doors to Dr Yunus's micro-credit system keeping Grameen as a model. However, in Bangladesh, Dr Yunus and his Grameen Bank has been experiencing bitter confrontations with the current government on different issues. 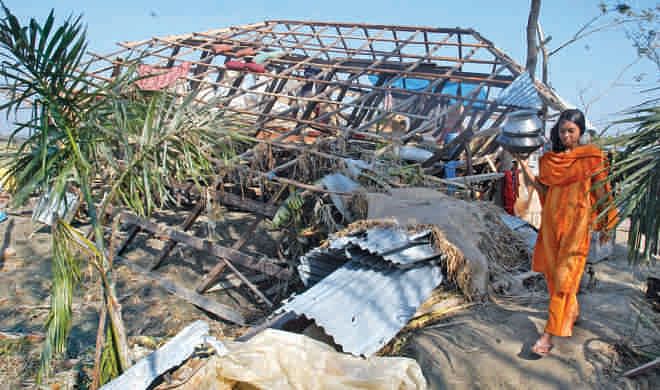 11.  The Curse of Nature (November 11, 2007)
On this day, Bangladesh experienced one of the most devastating tropical cyclones in its history, the cyclone Sidr. With the wind velocity of 200 km/h, the cyclone razed the southern part of Bangladesh, including the great Sundarban, to the ground. Around 10,000 people died and properties worth a total of $1.7 billion were damaged. Hundreds of acres of cultivable land and fresh water sources were damaged due to saline water intrusion that changed the livelihood of the people of an entire region. 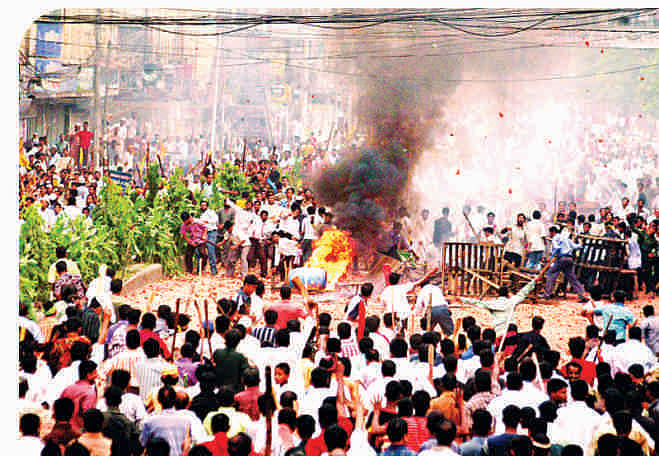 This deadly clash that caused the fateful day of 1/11. Photo: Anisur Rahman

12.  Army-backed Regime (January 11, 2007)
After violent showdowns of political parties and during severe countrywide unrest, the caretaker government backed by the Bangladesh Army took control of the country. Press censorship and curfew was imposed from that very night. The regime lasted until December 30, 2008 when they handed over the power to Awami League after their landslide victory against BNP. This army backed interim government introduced voter ID cards for the first time. The government also detained many political leaders including Khaleda Zia and Sheikh Hasina for corruption and other crimes. 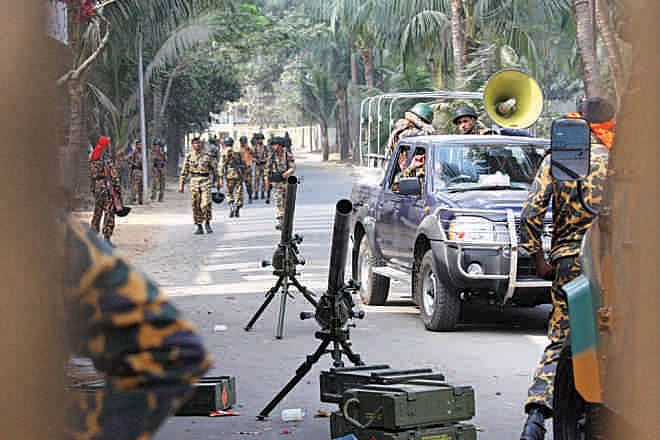 13.  The Massacre Within (February 25, 2009)
The brutality unleashed by the rebellious jawans of Bangladesh Rifles shocked the world. During the mutiny from February 25 and 26, 72 people including 54 army officers were killed by the mutineers. The bloodiest coup ended after a series of negotiations with the government. The trial started soon after detaining the mutineers. On November 5, 2013 the Dhaka Metropolitan Session court sentenced 152 jawans to death, 235 received sentences of between 3 and 10 years, while 277 were acquitted. This deadly incident severely weakened Bangladesh's military strength and its border control. 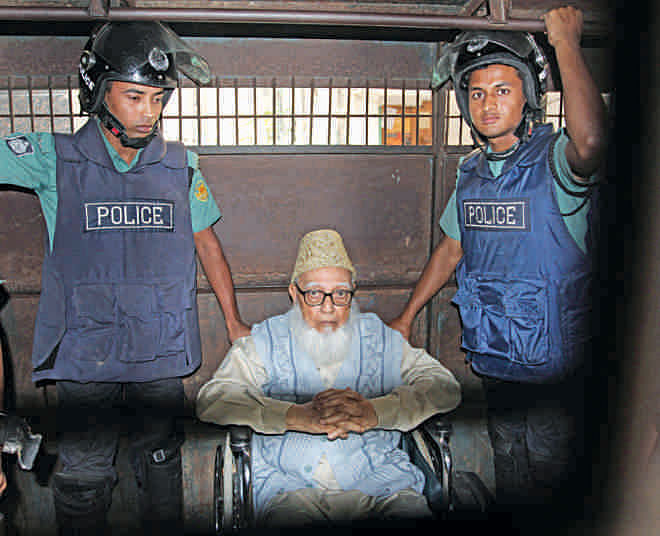 Professor Ghulam Azam, the lynchpin of Jamaat, during the liberation war was tried by the tribunal and given life imprisonment.. Photo: Palash Khan

14.  The Judgement Began (March 25, 2009)
By amending the International Crimes Act (Tribunal), 1973, the journey of the highly discussed international crimes tribunal began with a view to trying the persons responsible for committing crimes against humanity during the war of 1971. The amended law allowed the trial of political parties as well as the individuals that acted against the independence of Bangladesh and also authorized the government to file for appeal if the suspect is acquitted. The tribunal has come under severe criticism regarding the fairness of the process. Despite such controversies, the tribunal has sentenced six Jamaat leaders to death, one of whom has been executed and one sentenced to life imprisonment. The tribunal caused many violent protests and momentous incidents like the rise of the Gonojagoron Mancha and Hefajot-e-Islam.

15.  Inviting the World (February 19, 2011)
In 2011, Bangladesh (jointly with India and Sri Lanka), organised the Cricket World Cup for the first time. The country achieved the pride of organizing the grand opening ceremony of the tournament in Dhaka. The flamboyant opening ceremony attracted tourists from the entire world and it outshone many previous arrangements of its kind. 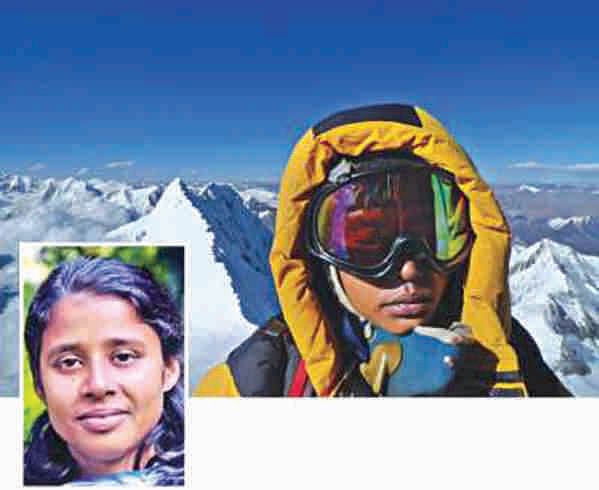 Nishat Majumder on top of the world. Photo: courtesy

16.  Women on top of the World (May 19, 2012)
Nishat Majumdar became the first Bangladeshi woman to climb the Mount Everest. She reached the summit at 9:39am and hoisted the flag of Bangladesh. Another Bangladeshi, Wasfia Nazneen, climbed the highest peak a week later, on May 26, 2012. Bangladesh is the 67th Everest conquering country of the world. 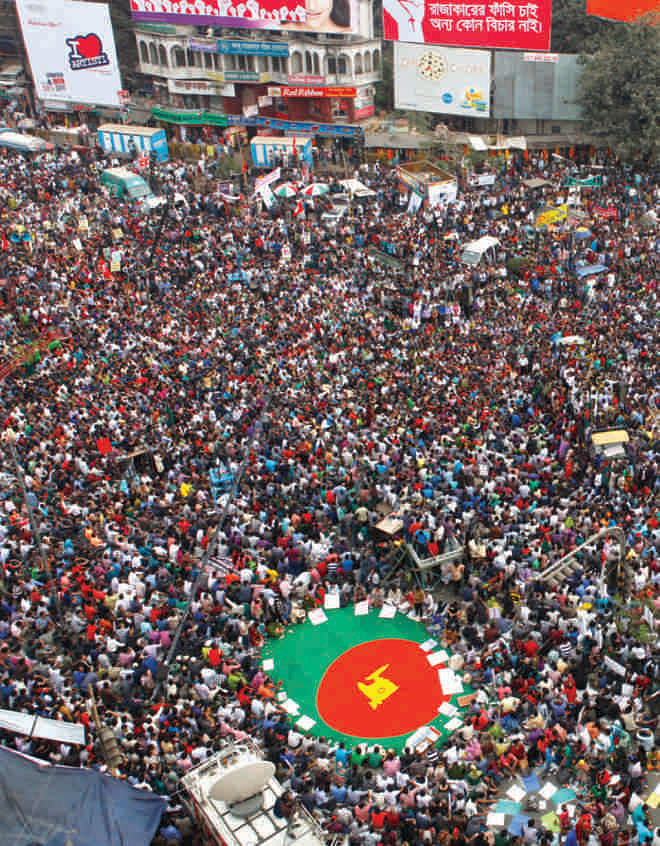 17.  The Upheavals of Our Time (February 5, 2013)
Hundreds of thousands of Bangladeshis gathered at the Shahbagh intersection, an important point of Dhaka, with only one demand; the trial of war criminals. The protesters pointed out that the sentence of one of the accused Abdul Kader Mollah was too lenient, and demanded the death sentence for all the accused people. On the other hand, an organisation of Madrasa students and teachers called Hefajat-e-Islam organised a movement condemning Shahbagh protesters as 'atheists.' Both of these movements gathered hundreds of thousands of supporters in the capital. After a clash with the law enforcers on May 5, Hefajat-e-Islam was forced to leave Dhaka. And after the execution of Mollah, the Mancha, which has recently been suffering from severe internal conflicts, was also removed from its position in Shahbagh. These two massive upheavals had divided the country's population into two and it took a long time to restore normalcy in Bangladesh. 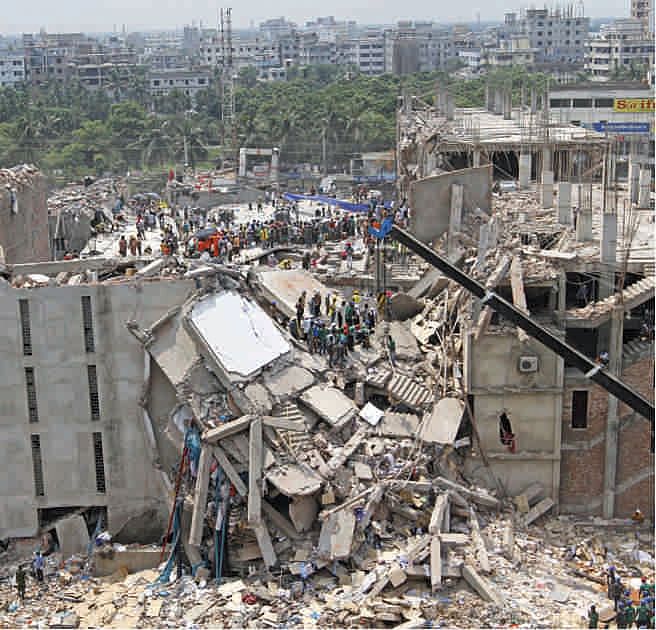 18.  The Rana Plaza Collapse (April 26, 2013)
This is one of the most tragic humanitarian disasters the world had ever seen. Thousands of garment workers died under the ruins of the eight-storied Rana Plaza. Preceded by several other disasters in the garment industry of Bangladesh, the collapse of Rana plaza alarmed the factory owners, international buyers and the poor workers about the working conditions of the industry. Under pressure from home and abroad, the government and factory owners are being compelled to improve the condition of industry workers. Human rights activists are also becoming conscious about the exploitative nature of Bangladesh's garment industry.

Bangladesh, amidst glory, pride and calamities, is gradually progressing towards the future. It has always surpassed disasters to emerge triumphant at the end of the day. We fervently hope that this resilient nation will overcome all the challenges and become a developed economy in the near future.

The writer can be contacted at [email protected]