Languishing in Iraqi city with insufficient food, water; ambassador says they might be sent back soon
Staff Correspondent 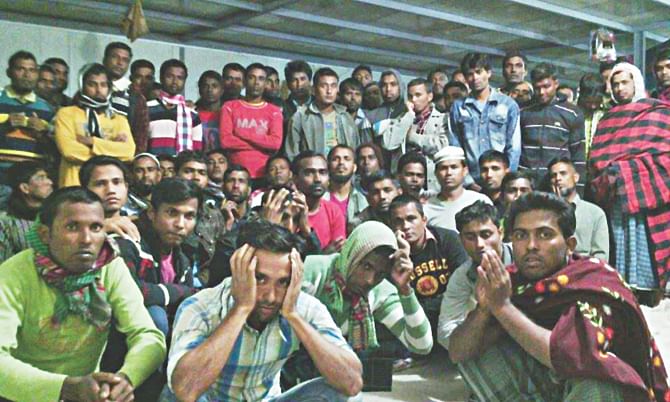 Around 100 Bangladeshis stuck at a camp in Najaf city of Iraq. They have been enduring untold sufferings there for nearly seven months with inadequate food and water. Photo: Courtesy

The 16 Bangladeshi migrant workers who claim to have been abducted by some locals are still passing their days in misery inside an old building in Najaf city of Iraq.

The Bangladeshis were “forcibly” taken to the building on Tuesday from a camp in the same city where they had been languishing with another 164 jobless Bangladeshis for the last seven months.

Many of the “abducted” workers have somehow managed to contact The Daily Star over the phone and said they are living in an unhygienic overcrowded room with limited access to food and drinking water.

They alleged they are simply confined to the building.

“You can't imagine my condition here. Foul smell emanates from a broken toilet. There is no arrangement for taking bath either,” Rafiqul Islam, one of the Bangladeshis, said.

Career Overseas Consultants Ltd had sent the 180 Bangladeshis to Iraq in May with promises of jobs at Abu Torab Housing Project run by a Turkish employer.

The recruiting agency however yesterday said the 16 Bangladeshis were being kept inside the building with the assistance of the Bangladesh embassy in the Middle Eastern country.

“The 16 workers are trouble-makers. They might have been taken to another place to ensure a peaceful environment at the camp,” Amir Hossain, assistant technical manager of the agency, said.

“Majority of the 180 migrant workers still want to stay and work in Iraq but only 20 to 25 of them are creating trouble,” he claimed.

Asked whether they were violating the rights of the Bangladeshis by confining them, he declined to comment.

The official also refused to say whether the stranded Bangladeshis, including the 16, would be repatriated.

Contacted, Maj Gen Rezanur Rahman Khan, Bangladesh ambassador to Iraq, once again denied that the 16 Bangladeshis were being confined.

He said they were just staying inside the building in Najaf city and added that it might be possible to send them back home within this week.

Being informed about the poor condition of the 16 Bangladeshis, Expatriates' Welfare and Overseas Employment Secretary Khondaker Showkat Hossain yesterday said no worker could ever be confined under any circumstances.

“It is a violation of the rights of the migrant workers. We will look into the matter,” he promised.

Earlier on Wednesday, the ambassador said they had arranged jobs for 63 of the 180 Bangladeshi workers at a construction company in Baghdad, just a day after the alleged abduction of the 16.

Some of the Bangladeshi workers, who did not want to stay in Iraq under any circumstance, were spreading the rumours, the ambassador had said.

On the other hand, the rest of the 180 workers still remain stranded at the camp which is situated in a desert area of the violence-torn country.

Rezanur said the embassy would try to get jobs for them or help them go back home.

“We will try to work according to their wishes,” he had said.

The 180 Bangladeshis have been passing miserable days at the camp in the southern province of Najaf due to lack of food, water and other amenities, including power supply, ever since they arrived in the country, alleged their families back at home.

The stranded workers have repeatedly requested both their employer and the Bangladeshi agency to either provide them with jobs or send them home, but all their pleas fell on deaf ears.